How to choose and buy the Bichon Frise puppy 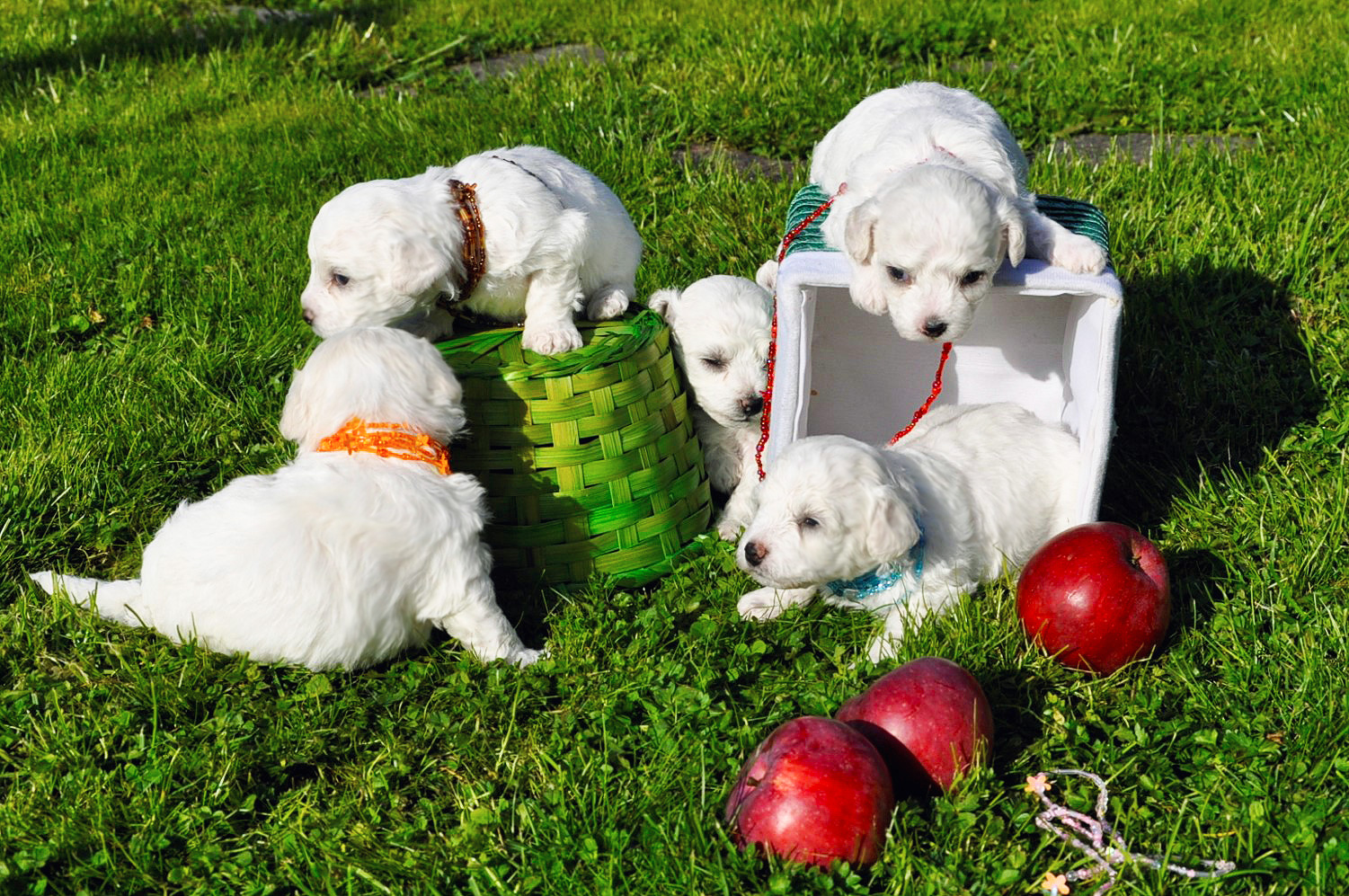 Everyone who decides to buy a dog should understand all the consequences. Some people compare it with the birth of child. And despite the fact that such comparison is a bit exaggerated, it has a grain of truth. The little puppy takes a lot of time, patience and love as the child does. But it will grow up much faster.

If you have decided to buy the Bichon Frise puppy, you can be absolutely sure that it is really good decision. These little white fluffy animals are the most amazing among the all lapdogs. They are very friendly and unobtrusive at the same time. Unlike many other breeds they do not stand and bother you with their barking or whining. They just wait patiently, but if the master is rude, Bichon can take offense at him. But it is quite easy to earn the forgiveness of this true friend. After all this dog adores the master and everyone who lives with him.

Many lapdogs behave as they are the center of the universe. They have no respect to the master's children and can even bark at the younger members of the family. Bichon will never take the liberty of doing so. He will gladly support every funny game: either playing ball or simply running. The fanciers often say that this little dog has a big loving heart, so the dog understands very well how important the children are for the master and is very patient when the children try to pat him. When his patience is over, he will just go away and hide somewhere.

What is the difference between the show and the pet class?

You should visit the bench and to communicate with the fanciers in order to know more about the Bichon Frise breed. As a rule they are excited to speak about their pets. Perhaps you will meet the parents of your future pet and to make friends with them.

If you are not an expert on the Bichon Frise breed, you will hardly determine what exactly the puppy will be when it grows up. In this case you have to trust the fancier. As a rule the professionals immediately understand who is in front of them: the future winner or just the true friend. If you want your dog to participate in shows and win the prizes, you should tell the fancier about your plans.

There are the future starts and the pet-class dogs in every litter. But do not think that the Pet Class is the kind of bandy-legged, toothless or sick animals. No, these are the puppies which cannot win the prizes for some reason. For example, the negligible undershot bite will not allow the dog to take premier place, but it will not be a trouble for living with the master.

A lot of people who want to buy the Bichon puppy say they do not need the Show Class puppy and they just want the dog for themselves. It is not clear what exactly they mean, but the buyers are usually pretty sure that the «home» puppy should cost much less than the «bench» one. It is important to understand that the Pet Class puppy really costs less, but the difference in price will not be large. Let's try to know why.

Why does the Bichon Frise puppy cost so much?

Before putting up the puppies for sale, the fancier does a great job. At first he needs to raise the brood bitch to the mate age. It is not true that the dog get brood several times a year. The fancier does not need the sick animals which can be born if the brood bitch is mated in every season. After all the dogs do not differ much from people and the pregnancy and the parturition is the hard work.

Before the dog grows up, the fancier needs to take it to the bench and get an estimate. This is called the allowance for breeding, and no club will register the matting without it. It is the ideal case when the estimate is not lower than the «very good» and the female has some more serious titles. This confirms the fact that the dog is really good among its breed and therefore its offspring will also be worthy.

The next step is searching for the decent male dog. And of course it should not be simply the neighbor. The true fanciers choose the male dog so that the offspring inherit all the best from the parents. The fanciers often go to another city or country in order to make the mating happen. But that is not all. The pregnant female should be fed well and looked after. And when the parturition time comes, the help of veterinarian may be needed. It is often difficult for the small dogs to get without help. Then the fancier should raise the Bichon puppies to the certain age, pass the examination of professional cynologists and get the documents for each puppy.

The future owner of the puppy gets the puppy's card (the contract on alienation of the dog, the Contract on the change of the ownership). This document will contain the information about the fanciers, the parents of the puppy, its name and the date of birth. Also it is important not to have the flaw mark, because in this case the dog will not be able to participate in the dog shows. Also the owner gets the veterinary passport where all the vaccinations are listed.

These are two main documents for the dog. Afterwards the puppy's card will be changed to the genealogical table with the full list of ancestors and the passport will be current for the whole dog's life. All self-respecting fanciers sell the dogs under the contract where the both sides are mentioned. And as far as the dog is equivalent to the property, there are the same norms of law as for the car or the sofa.

Watch out! – The danger!

There can be one more bad moment. It happens so that the female was mated with the dog man of the same breed. This means that the Bichon puppies will correspond to the breed but there is one detail. If the female is not approved for breeding and the mating is not registered in the club, the puppies will not have the documents. In other words these will be the beautiful dogs, but technically they will be regarded as mongrels. And these dogs will have no chance to participate in the dog show.

Do not buy the dog at the poultry market, the subway or the similar places. The internet advertisements offering the high-bred Bichon Frise puppy can be the fraud. The fanciers often find the photos of their brood dogs in different advertisements. Yes, you can buy a dog much cheaper there but you should understand that it is not a toy. The dog should live a long life with you. And it should be healthy and happy. After all when you want to buy a car, you go to the dealer but not to the dark garage where the car is shown in the faint light.

Do not be surprised if the fancier asks you about your living conditions, availability of the elevator and the other strange things. Do not forget that they treat their puppies like children and feel anxious about them.

You should get acquainted with puppies' mother. The chances to see the father are very small unless it is from the same kennel. As a rule the fanciers have few females and one or two male dogs. And the imported male dogs mean the new blood that brings only the positive effect.

The basic rule is that the Bichon Frise puppies should be active, friendly and cheerful like the healthy children are. The enclosure where they live should be clean and the female dog should be well-care-for. If you see the swaying thin female and the same thin puppies, do not believe that the dog is just tired because of the parturition and the lack of milk. It is just a slim excuse. If the female dog has lack of milk, the true fanciers feed the puppies with the milk replacer from the bottles in order to have the healthy puppies.

So here are the main things you should not forget when buying the Bichon Frise puppy:

Remember that everything – the dog is the property either – has its price. That is why the high-bred Bichon Frise puppy, grown up in the appropriate conditions, cannot be cheap. Do not try to save money. It is your future friend. And the conditions where it has been lived can have an impact on how long you will be together.

Find us on Google+